As we present our 8 Caravan magazine, we wish to issue a vote of thanks to all the blessed souls for joining and helping the Caravan of Baha’u’llah, it is the best form of motivation for us to receive emails filled with love and blessings from across the globe. With the grace and blessings of our Master this Message of love and oneness of Mankind is now reaching all corners of world, we have received amazing news from friends in Canada and Singapore, who have informed that they have sent 2000 and 5000 copies respectively of the last caravan issue to interested Baha’i friends worldwide who have requested to be part of this Caravan of Baha’u’llah. One of the friends from Australia has started a study program in which friends gather and read “Tablets of Baha’u’llah” which is highly effective in imbibing spirituality. We would encourage friends to follow / start such study programs in their respective homes.Last Month we have conducted the First ever Global Baha’i Get-together Webinar, where Baha’is from 8 countries got connected with each other, However due to limited resources we could not handle the massive response. We sincerely apologize to those who could not get a chance to get connected to the online conference. At this Conference Baha’i friends have suggested to put efforts in increasing the publication of books focused on the teachings of Baha’u’llah. For this, very shortly, A Free Baha’i Publishing Trust will be established. One of our beloved friend is also writing a book “An Analysis of Will and Testament of Abdul Baha” and another has submitted the idea of writing a book on Shoghi Effendi, Ideas which were appreciated by all friends in attendance. Most friends have complained and narrated their ordeal about the tyranny of Baha’i administration which was very sad to hear. We have asked them to focus on teachings of Baha’u’llah and to leave this crumbling administration aside, as the Master has taught us :He has not appointed any officers in the faith, and hence we do not believe in any such administration. We take inspiration from the Master’s example on teaching where at an old age he travelled to the USA and Europe to spread teaching of love and peace, while on the other hand is Shoghi Effendi who usurped power by forging the Will of the Master, and subsequently making the faith into an organization sans spirituality. 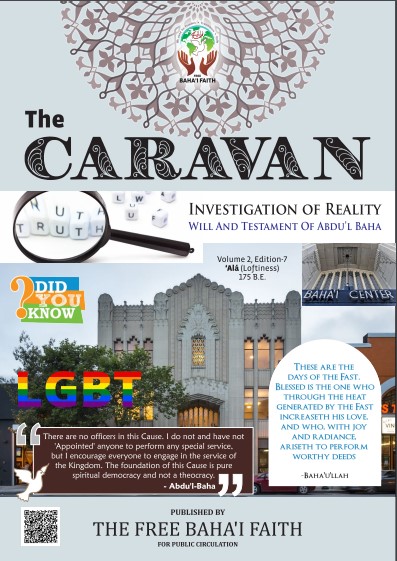 Click here to read such articles and many more from THE CARAVAN magazine. 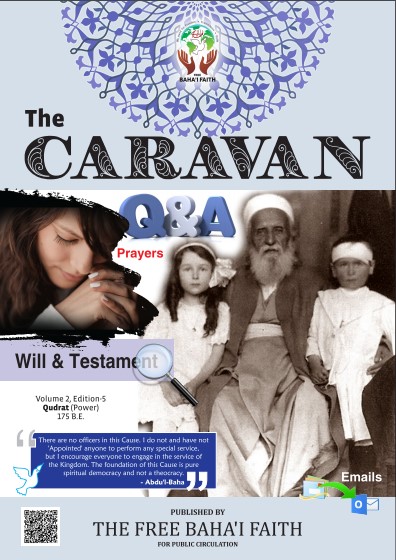 One of the fundamental principle of the Baha’i faith is the Unity of Mankind and love for brotherhood irrespective of any race, where the entire humanity is under the same roof of unity as is mentioned in one of the several quotes of Baha’u’llah:

“The earth is but one country and mankind its citizens”

(The Kitab-i-Aqdas: The Most Holy Book)

However, after the sad demise of Abdul Baha, this fundamental of Faith was disobeyed. To know how this happened, read THE CARAVAN MAGAZINE here.

For long the Free Baha’is have foretold the faithful about the dangers of deviating from the true teachings of Baha’u’llah and Abdul Baha, and how such deviations can only cause a decline in the spirituality of the faithful along with an abysmal lack of interest in it. By tutoring the faithful to stick to the Ruhi curriculum one cannot expect the faithful to maintain the spirituality which flows naturally in the divine words of the Master. This system of Administration along with its misplaced priorities has made the faithful greedy of positions and commissioning. A Baha’i today does not aspire closeness to Baha’u’llah but rather aspires to be part of the administration and to be given positions therein and to be made members of various boards here and there. All of this lack of interest has taken a huge toll on the spirituality of the Baha’is. This lack of spirituality, nay, The death of spirituality in manifested by the abysmally small number of Pilgrims visiting the Holy Land.  I Would like to refer to the article published in “The Jerusalem Post” on 26 of December 2018 , which while stating that the total number of visitors to the state of Israel was about 4 million there were only about 0.1% of them who were Baha’i. Which when translated to actual figures means that only about 4000 visitors to the State of Israel were Baha’i. Also considering the fact that this year saw the convention to elect members of the “UHJ” we can safely assume that around 2000 of those 4000 visitors came for the said convention. That leaves only2000 Pilgrims for the entire year of 2018 to have visited the Holy Shrines. This figure when compared to the global population of the Bahais shows that a disappointingly low percentage of the “Faithful” would have made the pilgrimage this year. First the faithful were turned away from the holy texts and now the administration is turning the Faithful away from the holy land too. It is sad to see the spirituality and the Faith get erased from the hearts of the faithful in such a disgraceful manner and makes one wonder : WHAT REAL PURPOSE IS THE ADMINISTRATION SERVING ??? 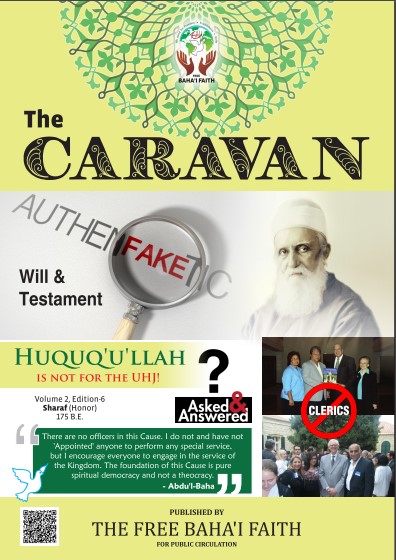 To read many such interesting articles, read THE CARAVAN MAGAZINE here

The teachings of Baha’u’llah and the Master was always freedom from the clan conception of life. Therefore, the appointment of a successor in the face of Shoghi Effendi, endowed with all the powers of a pope, means a reversal of all they taught during their lifetime. They always emphasised Independent Investigation of Truth, although after Shoghi Effendi came to power all the Baha’i principles were never acted upon and people were forced to follow what they were ordered to, and the freedom was taken away. The Will of the Master was force-fed on the Baha’is. Those who tried to investigate and question the Will were declared faithless. This made the Baha’is of that time accept what was not an established fact. 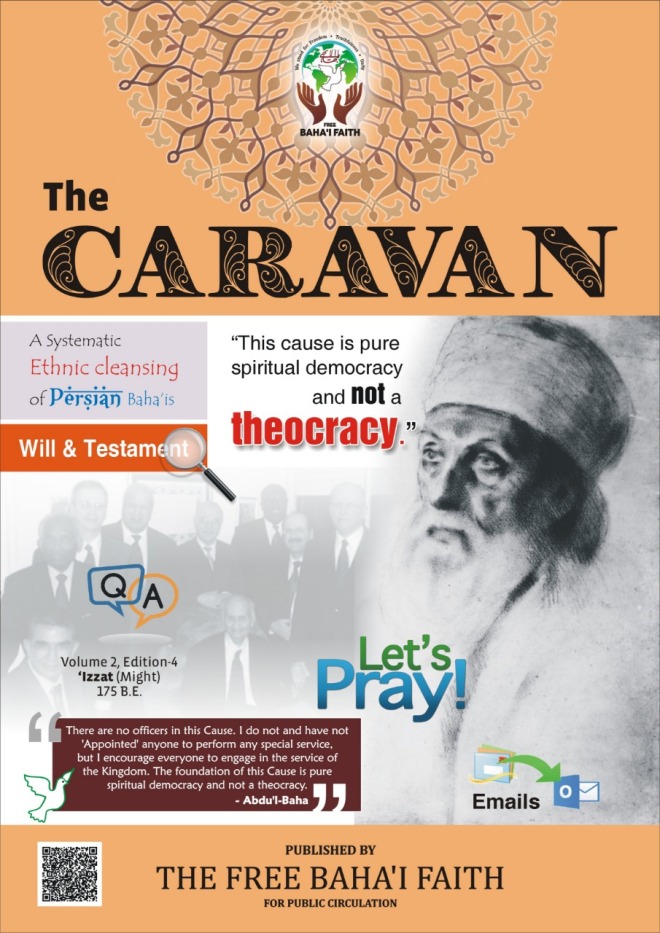 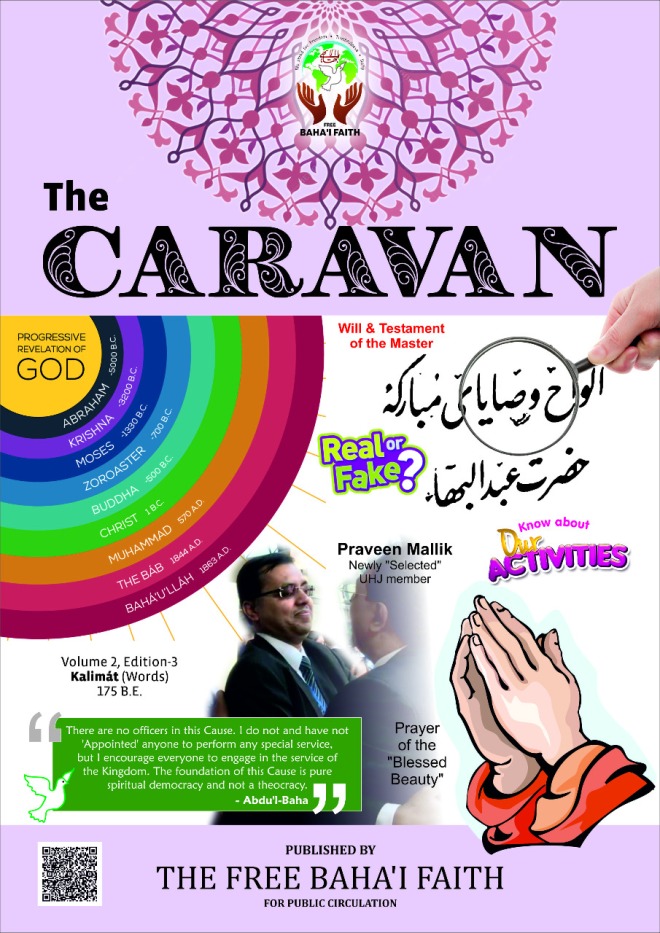 We are glad to have The Caravan Magazine latest issue. To read complete magazine, click here 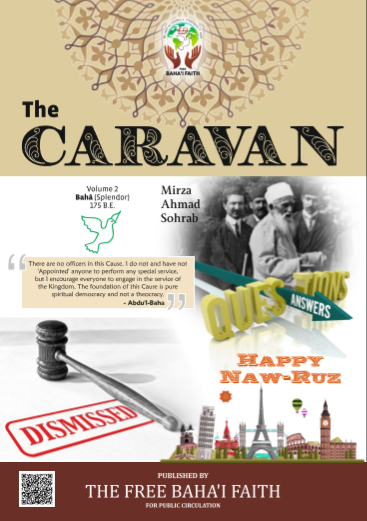 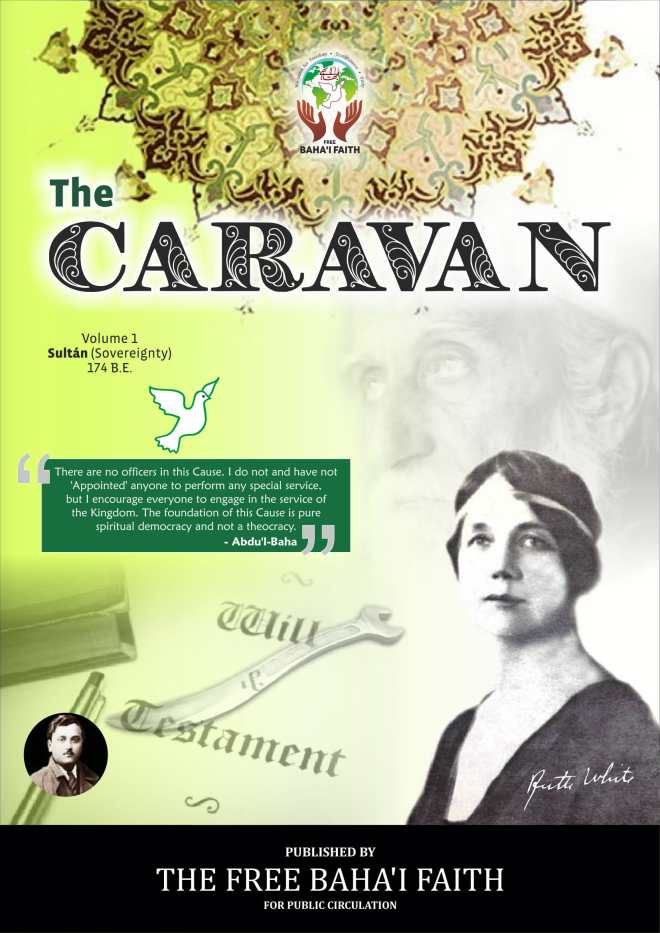 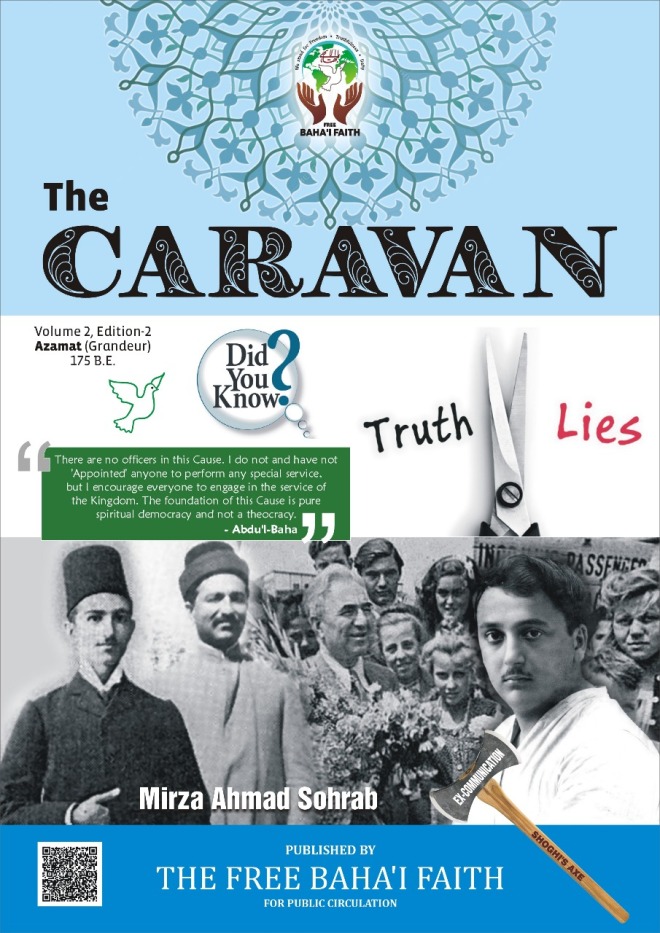 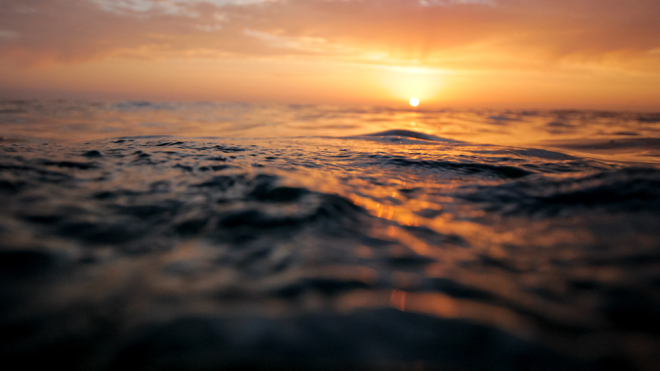 I am John Campbell(name changed), resident of Canada, Electronic engineer by profession. In the year 1998, I met this beautiful Catherine Jay(name changed) at a party. We were good friends since then. Our relationship went closer further and we decided to tie knots. We got married finally in April 2007. Life has been really good to us so far. We enjoyed the beautiful moments of our married life. We were then blessed with a son in May 2013- named him Allen.

One of my close friend Peter once took me to a Baha’i gathering. It was a devotional gathering which began with the prayers. It was followed by music and chorus singing. People began to socialize with each other and it ended with light snacks. I really liked the ambience and the spiritual atmosphere of this gathering. He introduced me to the Baha’i fundamentals and beliefs. At the beginning I was quite hesitant to know more about the faith. But as time passed by, I learned more about the faith and was convinced that Baha’u’llah is the Manifestation of the God for this era. I was really blessed with the light of guidance to the true religion of God. Me and Peter combined our efforts to explain my wife about what this faith is. She also accepted the faith. Now we were Baha’is. We started attending Nineteen Day Feast at every month of the Baha’i calendar. The community warmly welcomed us. We made new friends there and use to have a great time with them. It felt more like a family than a community. The system of adminstration which is clergy-free, really inspired me. Election of various administrative bodies was quite fair and transparent. However after some time, me and Catherine both realised that there has been some favouritism. Few Baha’is who were in the faith since generations always had a greater say. Eventually things became so bad that secret meetings were held to make decisions. And those less-influential ones were sidelined. All this while we both were little sinked emotionally, but we continued to go to the community and attend the gatherings for the sake of benefitting from Divine Words of Baha’u’llah. We shared our thoughts with Peter, which initially he denied. Later, he also agreed to this discrimination and he himself became the victim once. Meanwhile I got my hands on the book of a Baha’i author Lady Ruth White. I went through her work and realised that she too was against the administrative nature of the faith. She alongwith her friends had formed New History Society for the purpose of preaching the words of God selflessly. They succesfully spread the Divine message away from the shackles of administration and they had a huge following. Gradually we ceased attending the meetings, and use to do prayers and read Baha’i teachings by ourselves. Interestingly in 2015, I found on internet, a group of Baha’is calling themselves “Free Baha’is”. They followed the footsteps of Ruth White and her friends. I corresponded with them and realised they were fantastic people whose aim is to disseminate the Holy teachings, not under the supervision and administration of any House of Justice. I was grateful that once again I received the Light of Guidance….

I wish all the love and success to the Free Baha’i Team working at freebahais.org. I pray that their efforts are accepted by the Abha Beauty and may they get more blessings to work for this cause in such a selfless manner. The Caravan Magazine that is published is a wonderful piece of work by the team, that was initially started by New History Society.The team happily permitted me to post their magazine on my blogs.

(P.S: True identities have not been revealed, as we do  not want to be targeted by NSA)